About the Celebration Brass Quintet

The Celebration Brass Quintet was founded in 2001 by members of the Minnetonka Symphony Orchestra and began its career as artists-in-residence at Gethsemane Lutheran Church in Hopkins. Drawing from a library of more than 700 arrangements, the quintet has developed a wide repertoire in a variety of musical genres, including jazz, Dixieland, ragtime, classical, show tunes, and "golden oldies." The Celebration Brass has played at numerous venues across the Twin Cities area, including Music Association of Minnetonka concerts, weddings, churches, arts centers, retail stores and senior residences. 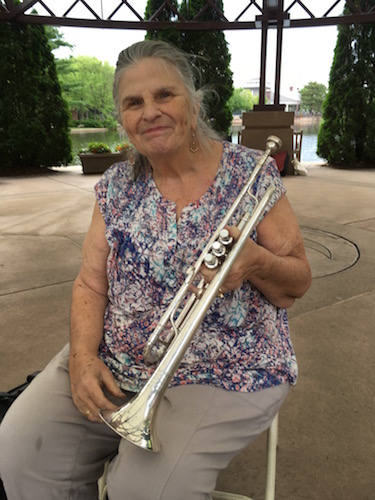 Betty pursued her music studies at Augsburg College. She played for over 30 years with the Da Capo Brass Quintet, whose performances include the Prairie Home Companion and Minnesota Public Radio's "Live from Landmark" concert series, and numerous recitals at the Minneapolis Institute of Arts. She is a member of the Twin Cities Trumpet Ensemble, which typically performs 10 concerts each season at venues such as the Como Lakeside Pavilion, the Lake Harriet Band Shell, the Ives Auditorium, the Vintage Band Festival (Northfield) and the Phipps Theater (Hudson). Betty is also a member of the Minnetonka Symphony Orchestra and performs regularly with the Dakota Valley Symphony. She has performed with theater groups across the Twin Cities area, including the Gilbert and Sullivan Very Light Opera Company, the Lakeshore Players, the Cross Community Players, the Masquers Theater and the Morris Park Players. 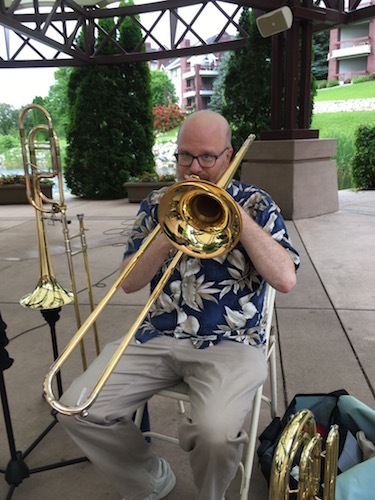 Kevin graduated from Indiana University with a Master of Music degree in trombone performance. He is a member of several local groups, including the Minnetonka Symphony Orchestra, the Minnetonka Concert Band, Minnetonka Jazz Band, and Toreadors 4. He has played with a number of other groups in the Twin Cities including the Kenwood Symphony Orchestra, The Cities Orchestra, Universal Jazz, Brio Brass, Cross Chamber Players, Lyric Arts of Anoka, Off Broadway Musical Theater of New Hope, Mounds View Community Theater, and the Calhoun-Isles Community Band. Kevin has also performed with many groups outside of Minnesota, including the South Dakota Symphony, the Sioux City (Iowa) Symphony, Columbus (Indiana) Pro Musica, Cumberland County (Tennessee) Playhouse and The Carpenters. 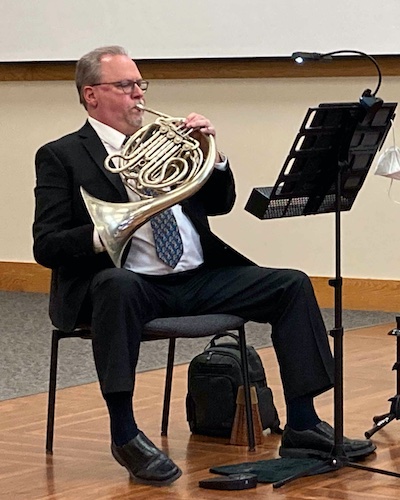 Jim attended Indiana University where he studied with Robert Elworthy, Michael Hatfield, and Philip Farkas. He began working as a freelance musician in the early 1980's, performing in the Twin Cities. He has played many Broadway shows and musicals including 42nd Street, Camelot (with Richard Harris), Joseph and the Amazing Technicolor Dreamcoat (with Donny Osmond) and performed at both the Guthrie Theater and the Children's Theatre Company. He performed with the Joffrey Ballet and American Ballet Theatre and was in the orchestras backing up Ray Charles, Rod Stewart, the Moody Blues, Andy Williams, Julie Andrews, and Henry Mancini. He recently played with the Rochester MN Symphony and currently plays with the Bloomington Symphony and the Church of St Agnes (Twin Cities Catholic Chorale). 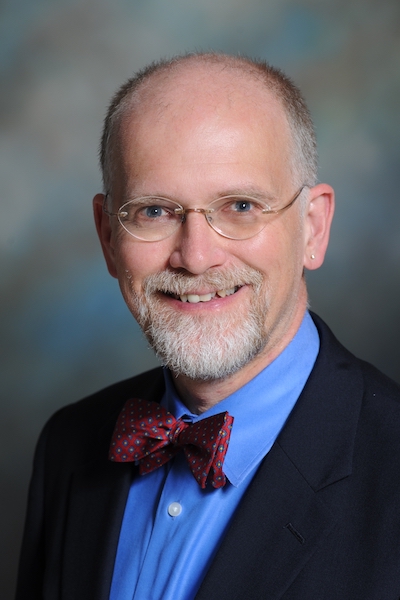 Peter was introduced to music by his father, an auto mechanic from Austria, who listened to the music of the great Viennese composers while working on the family car on weekends. Peter's first musical memory from childhood is the third movement of Haydn's Trumpet Concerto, so it was perhaps foreordained that he began to study the trumpet at age 10. Since then he has played and studied with some of the top musicians in the Twin Cities. His musical background is broad with experience in orchestras, large wind ensembles, chamber music, jazz big bands, and more. He has performed regularly at churches and other venues as a soloist and in ensembles. In his spare time, Peter is Professor of Medicine at the University of Minnesota.

Brian's love of music began in middle school when he picked up the trombone for the very first time. He pursued his music studies first at Southwest Minnesota State and then the University of Minnesota where he graduated with a degree in Music Education. He is a member of the Minnetonka Symphony Orchestra and Minnetonka Concert Band, and has served on the board of directors for the Music Association of Minnetonka. He studied with Tom Ashworth, Vern Kagarice, Jan Kagarice, and Alan Taylor.